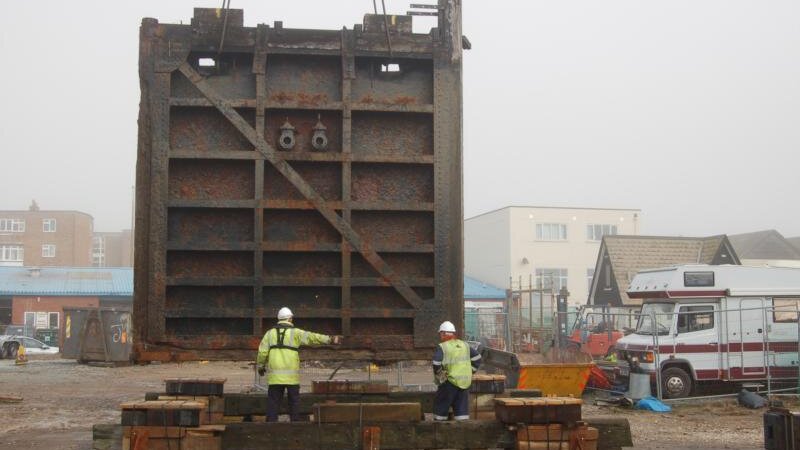 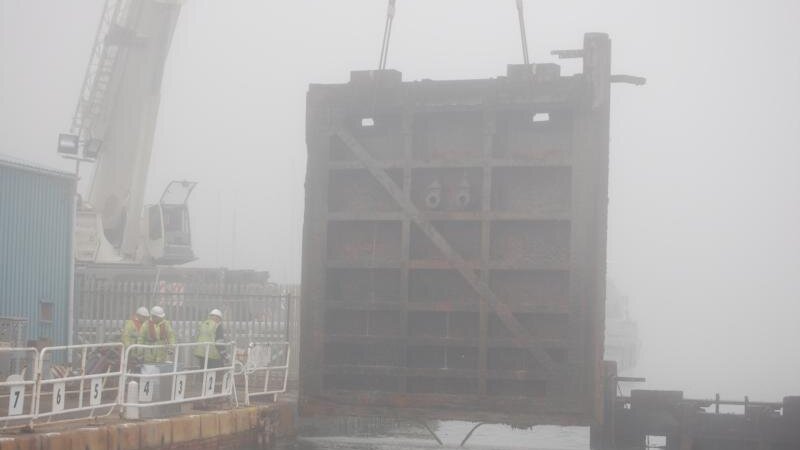 The gates to Shoreham Port's Dry Dock have been taken out for the first time in over 75 years so they can be repaired.  They were lifted out on a foggy day last week and laid down on the quayside by a 200 tonne mobile crane.

Shoreham's dry dock was created from the port's original Victorian lock in 1934 when the new Prince George Lock was opened next door.  The western end of the old lock was blocked up making a vital facility that has remained in use ever since.  Over recent years, though, the timber gate frames have deteriorated to such a point that the dock was difficult to drain down and keep dry enough to use.

Now, under the experienced guidance of Assistant Port Engineer Keith Wadey, the Port's Engineering Team is undertaking an extensive refurbishment of the gates.  The team is being assisted by a number of key contractors including marine steelwork fabricators Four-Tees Engineering, specialist painting contractors Coastal Preservation Services and Ashacre Scaffolding.

Keith Wadey commented that "the new wooden frame members, up to seven metres long and weighing over 1.5 tonnes each, have travelled down from the specialist hardwood supplier Gilmour & Howard near Glasgow, this is in contrast to the gate timbers, the steel and cast iron frames and fittings are in remarkably good condition for their age and will remain in place but with a new steel facing plate and several coats of fresh paint."

Once the gates are fitted back in the Dry Dock entrance in about six weeks time, a wide variety of tugs, trawlers, barges, yachts and other vessels in need of repair will be making the most of this rare facility.