Season's greetings from the team at Shoreham Port 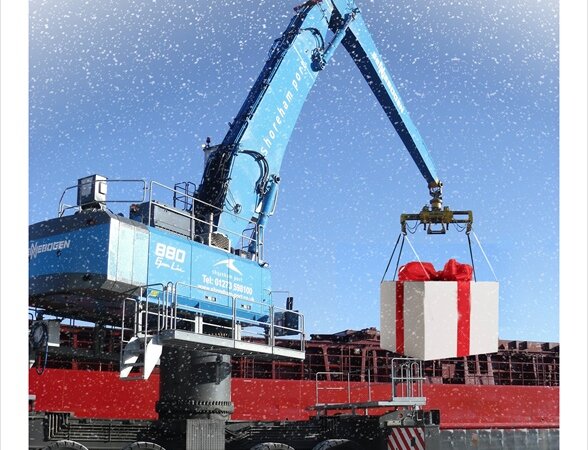 It’s been a busy and exciting year at Shoreham Port, with trade picking up from July, and will continue to be very busy over the Christmas period. Highlights from the year include welcoming a diverse range of new cargoes into the Port, winning planning permission for the new Edgeley Green renewable electricity generating facility and the grand opening of the Adur Ferry Bridge. Deliveries of housing units were dispatched in October. The unusual shaped cargo tested the skills of the stevedoring team who delivered a first class service and demonstrated Shoreham Port’s versatility.

At the beginning of the year Shoreham Port staff and members of the community joined at Southwick station to see winners of the community art competition have their work mounted on the station walls. The colourful and vibrant pieces continue to be enjoyed by commuters and station staff on a daily basis.

After the success of the art competition Shoreham Port launched their first poetry competition in September. There was a fantastic response to the competition with poems flooding in during the final two weeks before the deadline. The team at Shoreham thoroughly enjoyed reading through the diverse mix of poems and all are excitedly awaiting the results, which will be released in January.

During the year Shoreham Port has continued to invest in their staff with a number of employees undertaking additional training and gaining new qualifications in a variety of skills from diving to marketing. The Port also hired a new engineering apprentice who is enjoying working in a dynamic environment, developing his knowledge and taking on some challenging tasks!

Every year, in lieu of sending Christmas cards, the Port donates to a chosen Christmas charity. This year Shoreham are delighted to support the Rockinghorse Children’s Charity, based in Brighton. Rockinghorse brings hope to families in challenging times, improving the quality of life for some of the most vulnerable children in Sussex and Surrey.

Rodney Lunn, Chief Executive at Shoreham Port said “As Christmas races towards us we reflect over a busy and productive year and look forward to new opportunities in 2014. I would like to thank all of our customers and stakeholders for their continued support and our staff for their hard work and commitment throughout the year. We look forward to facing new challenges in 2014 and seeing the development of key projects that have been in planning this year.”

Merry Christmas from all the team at Shoreham Port!